Wayfinding signs by a signwriter are generally on walls, doors pillars & other areas vinyl won’t stick well too. This is useful for those businesses that have quite large buildings, such as Hotels, Pubs, Restaurants etc.

Not your glamourous show off, proud to have produced signwriting. With wayfinding signs its more a case of simple, effective & readable than decorative.

That was much the case for the internal signwriting required by Flat Iron Steak company who were in need of their wayfinding signs painted at 2 of their restaurants. The first being the location in Denmark Street, Fitzrovia & the other being a new premises in Spitalfields.

The lettering was specified to be in a basic font but to be specific to the one they use for their branding & to be in specific colours to match the decor.

The area all the signs were required were in a poorly lit stairwell & basement. To make it more difficult the clients were asked if they could refrain from being in the way while the work was carried out, but this proves very difficult as they need to continue their work as well as me carry out mine. The only real issue with this is adding wayfinding signs are required & quoted on based on a time consumption of how many signs there are & how long its likely to produce them. So delays in moving out the way for staff to get past or open & close doors costs time & then over runs the time calculated to produce the work, so its a double edged sword in doing this type of work. 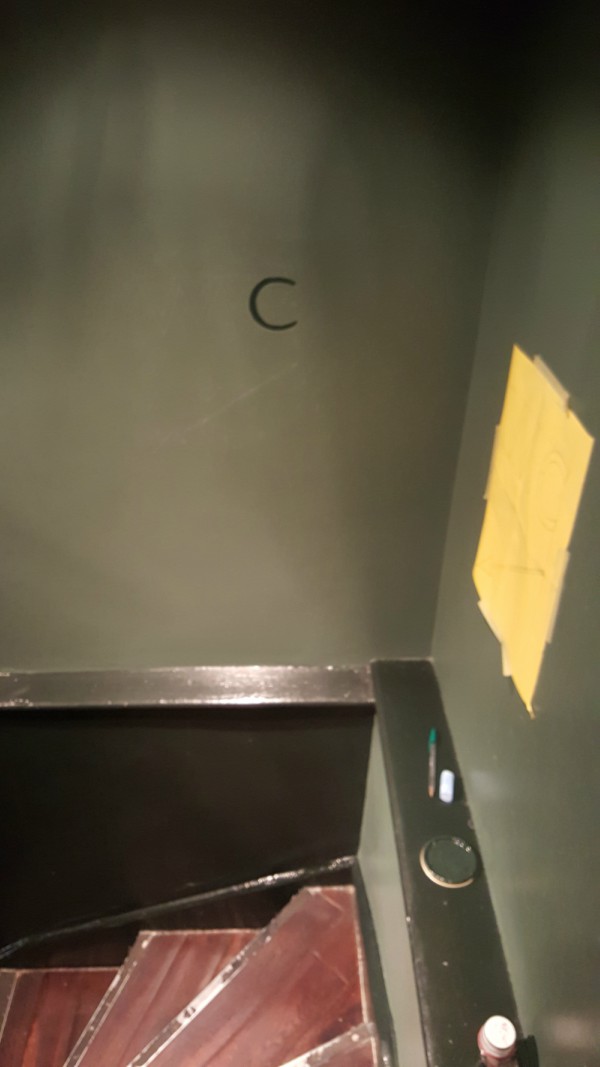 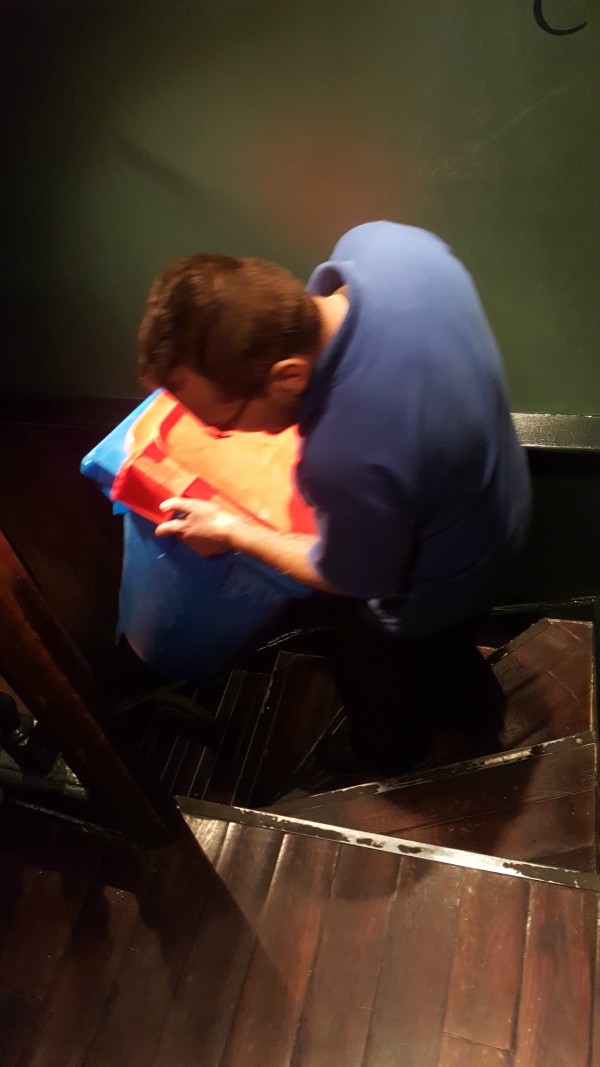 This tends to make a signwriter feel pressured into rushing or seeming rude by not moving out the way.  As a result the work is neat to a standard a client would be happy with but not one a signwriter would be proud of, but then it only keeds to say what it does & not be a work of art.

The requested work at the Denmark Street restaurant was for ‘W.C’ to be written 3 times. Twice on different doors & once on the stairwell wall. Then to add the word ‘Kitchen’ onto two different doors.

The stairwell W.C with the directional arrow was produced first as this was the most awkward to access & the only wayfinding signs in the matching wall colour, so this was produced using the clients paint, which they use to touch up the walls etc. 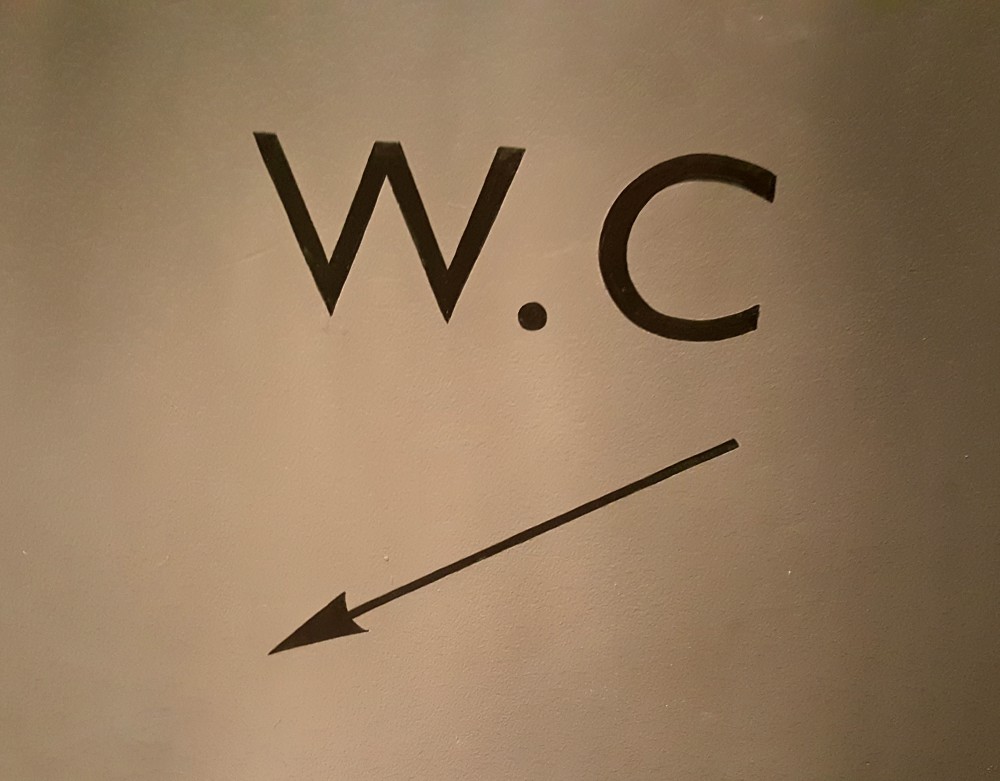 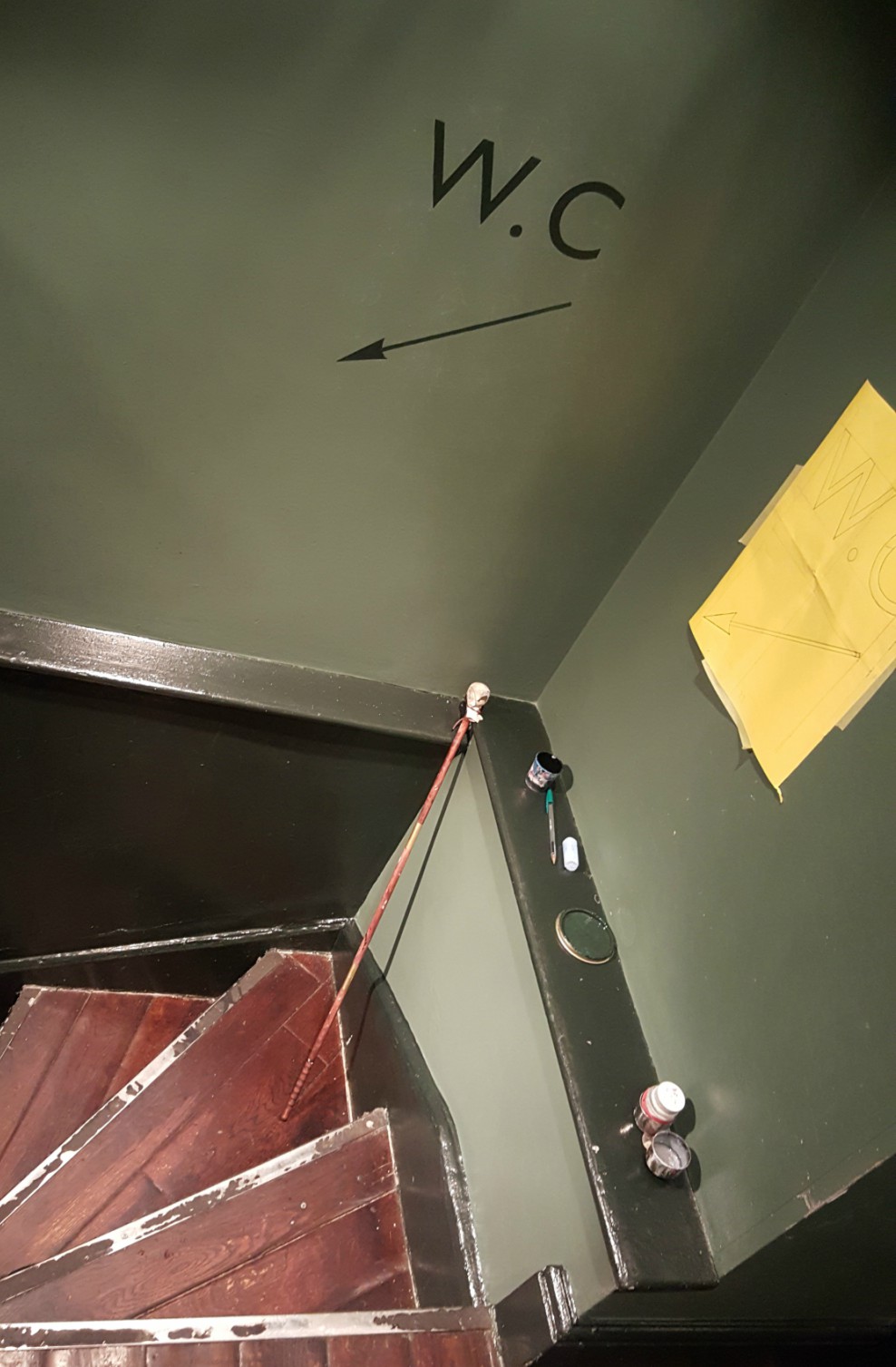 Then were the doors at the top of the stairwell which was one of the ‘W.C’ doors & a ‘kitchen’ door. 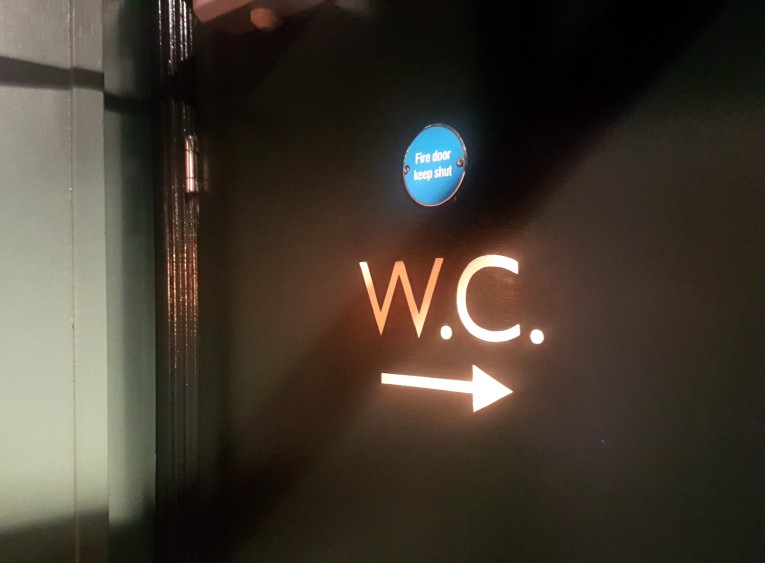 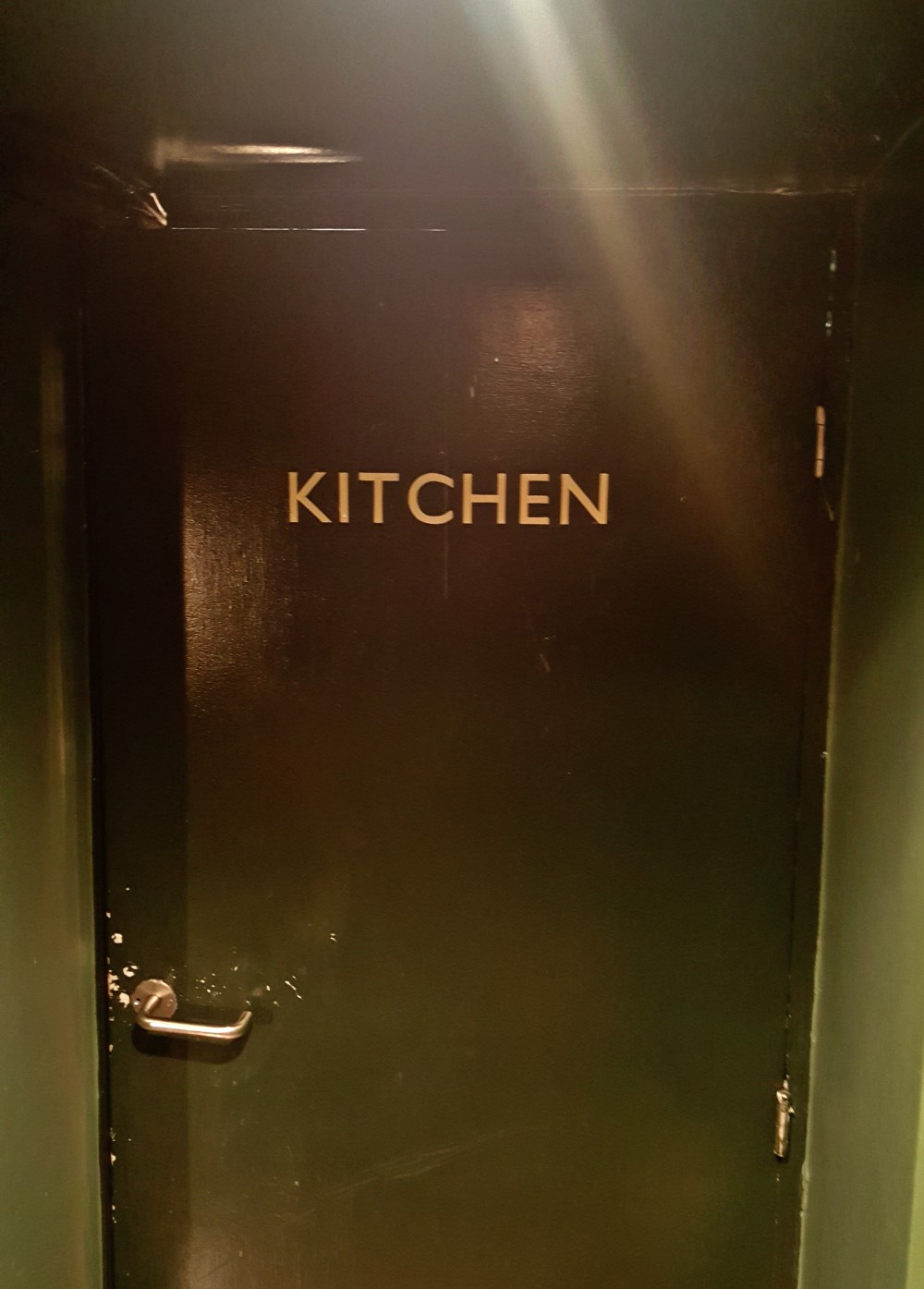 Once these were completed it was the basement doors to complete the job. The lettering was marked out & drawn to size on the doors first. 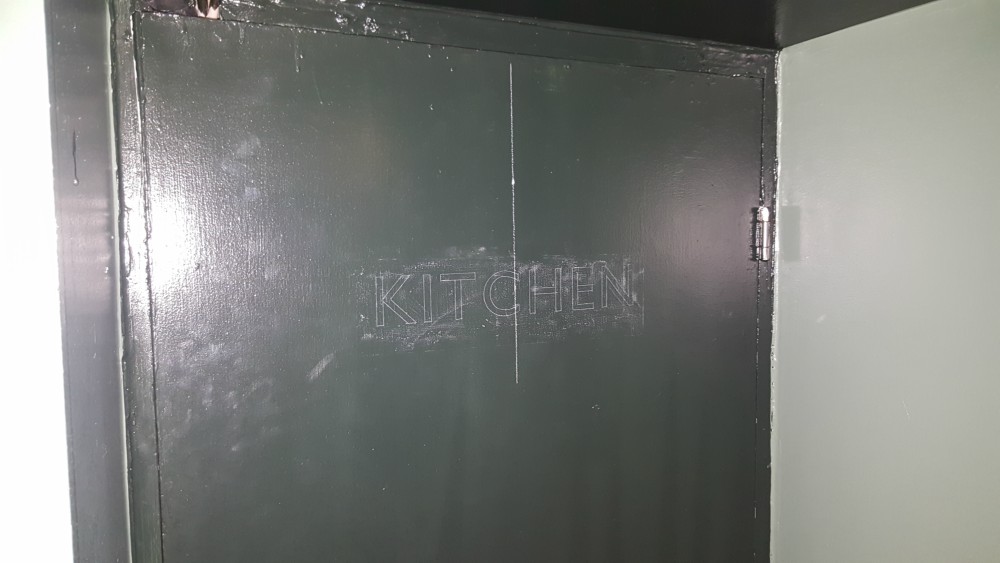 The vertical chalk line is marking out the centre of the door, so the centre of the wording is lined up to that. The lettering is then drawn onto the door before signwriting the wayfinding words in oil based paint. 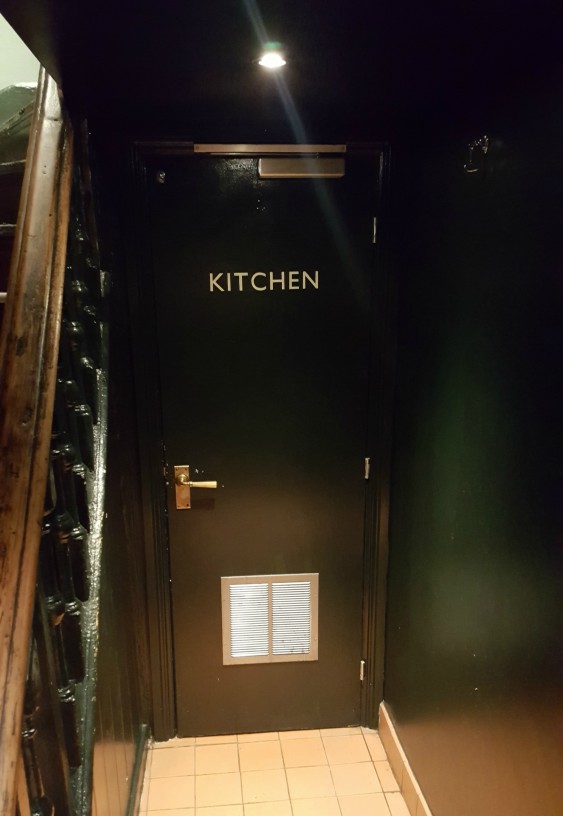 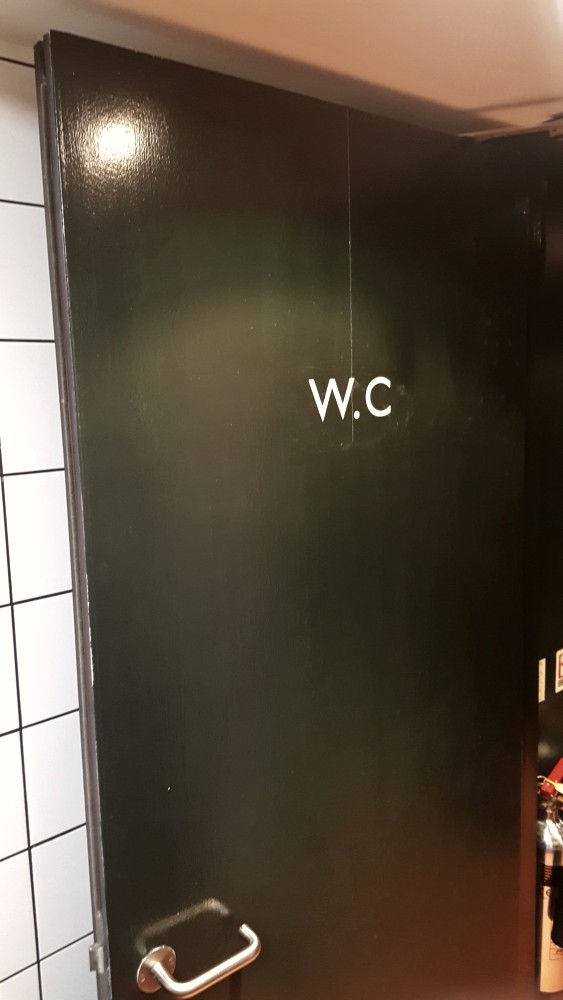 This restaurant was running a little behind schedule for getting completed, which meant I was called in to do the signs whilst the other contractors were still doing electrics, joinery, flooring & other jobs. This meant again the work progress was slower than quoted for due to other workers being in the way & furniture being moved in the way to allow for jobs to be done.

On this occaion the wording required was ‘Staff’ & a ‘W.C’ in the basement area, as well as  ‘Staff’ on a wall above a gangway, ‘W.C’ above the stairway, ‘Duck’ above the stairs & another ‘W.C’ on a door near the bar area. 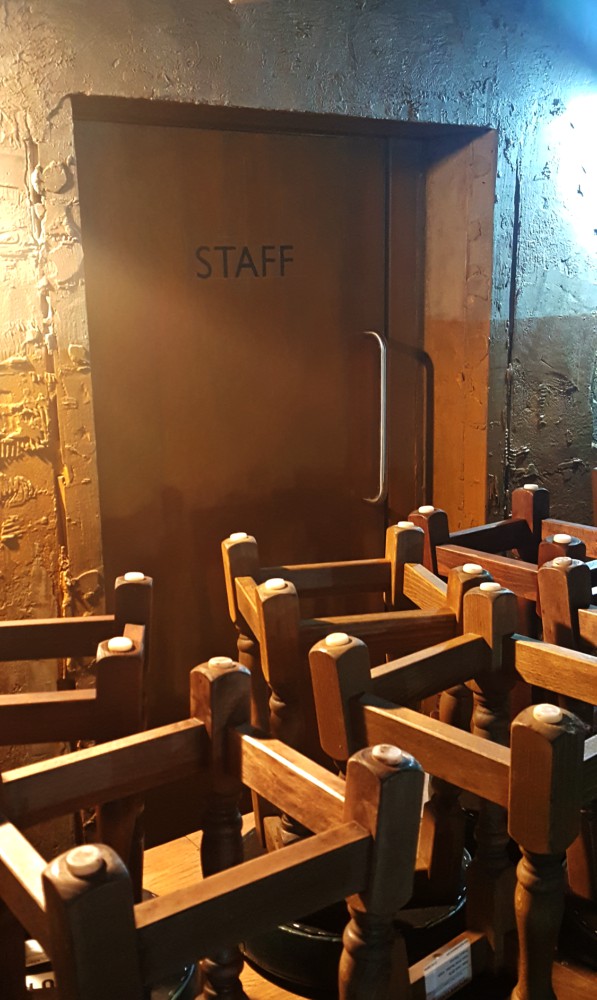 The other contractors had a lighting set up as there was no electric still, so light was dim but visable, albeit casting a shadow on the doors when signwriting was attempted. Access was limited to one of the doors but made enough space to fit in & be able to add the wording. 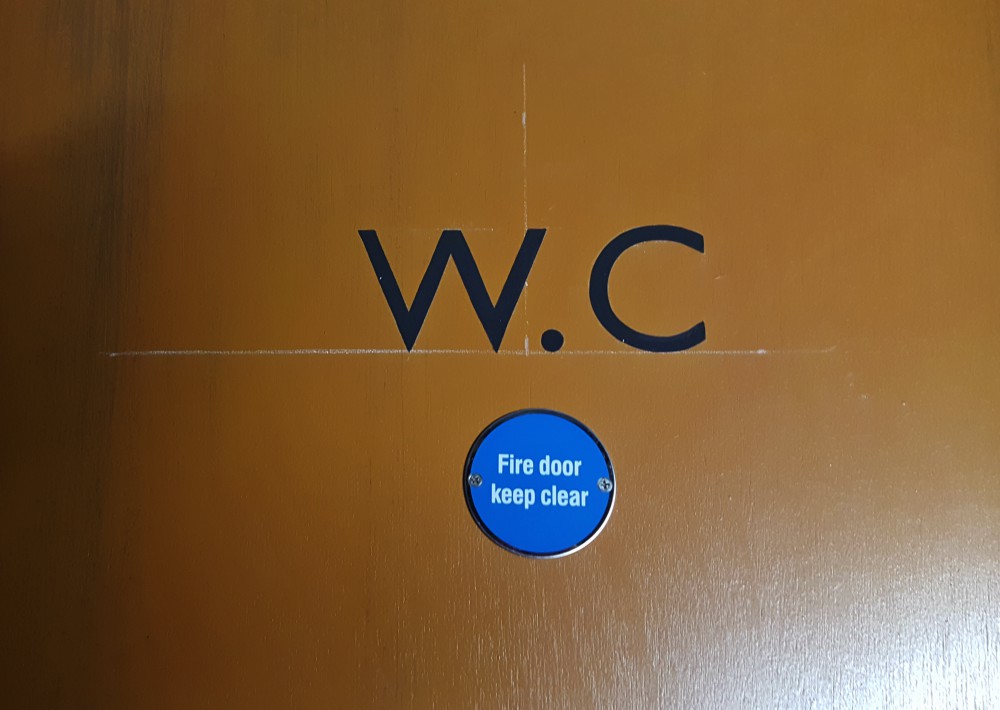 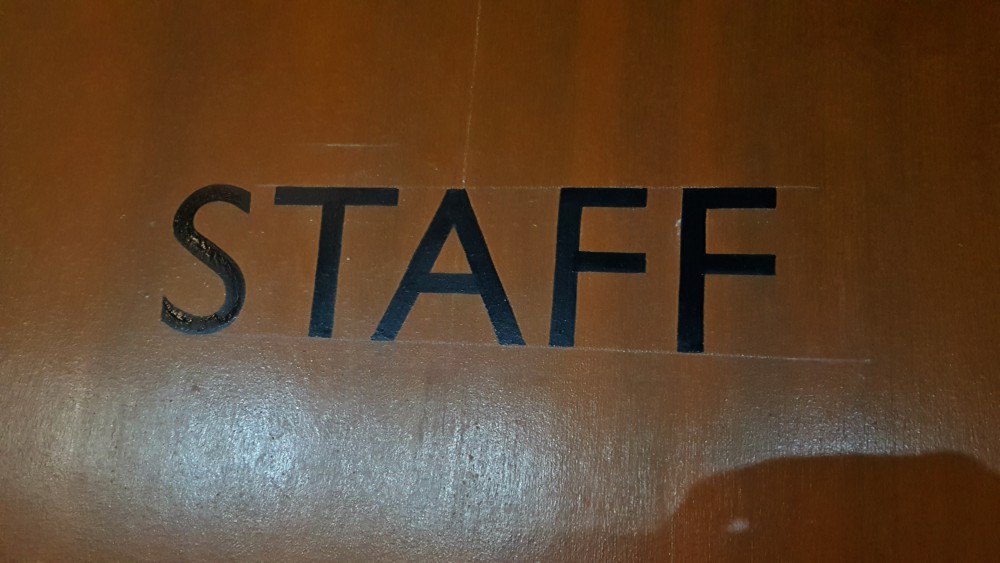 It meant the work was a little more tricky to produce but still a neat finish was produced. The lettering lined to the middle of the doors & then made sure was straight before signwriting them. The lettering carefully produced to a crisp sharp finish.

Above ground was chaotic to say the least with everyone in each others way trying to get their designated work finished. Luckily a lot of the contractors left the site for lunch at the same time, which allowed for the signwriting to be produced in their absence as it gave better access. 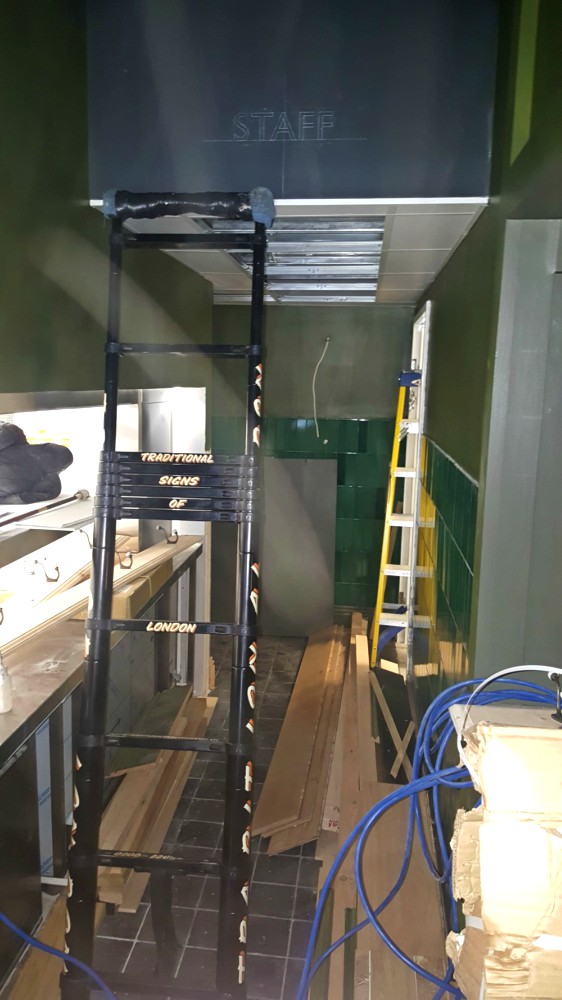 The wayfinding signs were produced in the gangway & above stairs first so that there would be less issue doing the doors to complete. So the first to be painted was ‘staff’ above the gangway which led to the kitchens. This was measured into the centre & ‘pounced’ in place with chalk. The lettering was then painted in an oil based ivory colour.  A specialist signwriting chisel edge brush was used to the correct size, which allowed for near on 1 stroke writing. 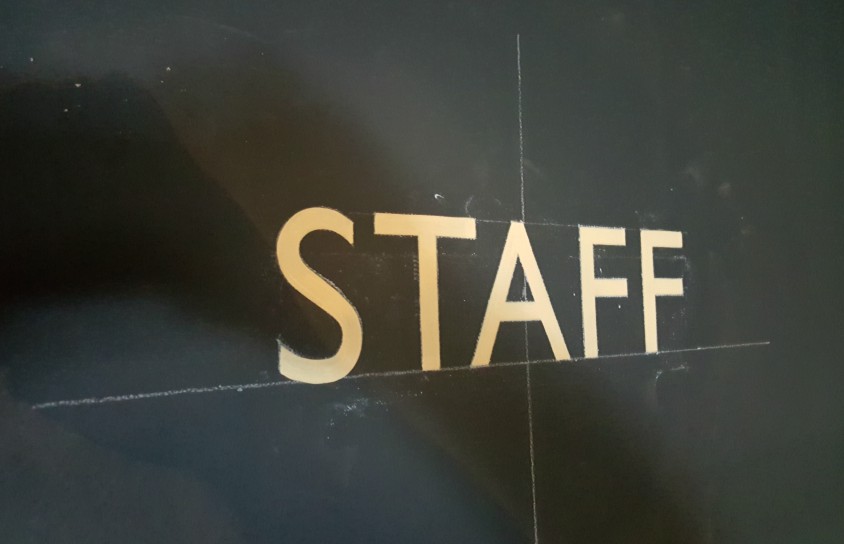 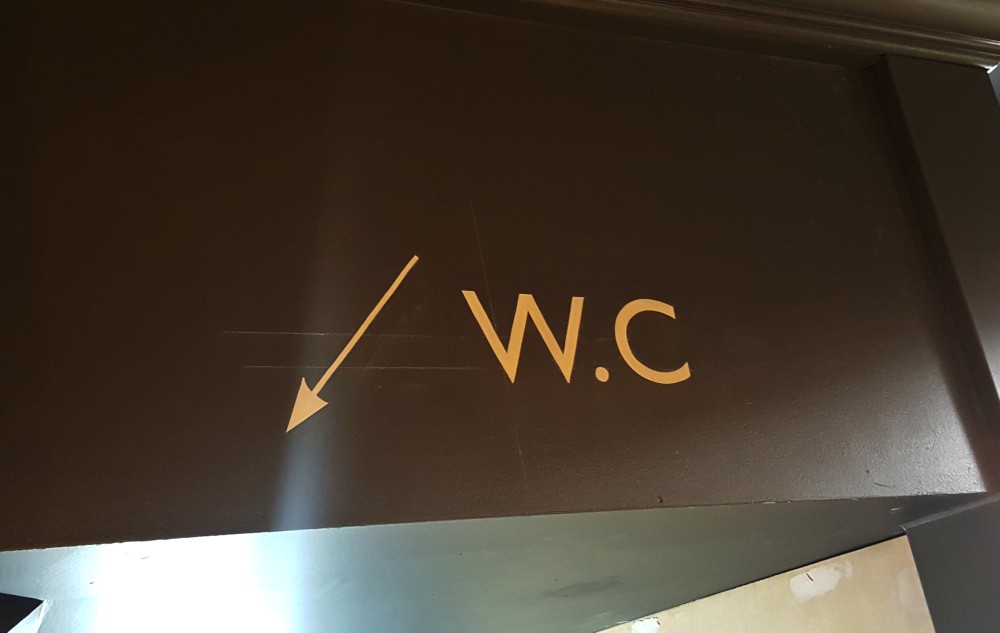 W.C was written on the wall above the entrace to the stairway before the word ‘Duck’ was added to the leaning wall/ceiling above the stairs. 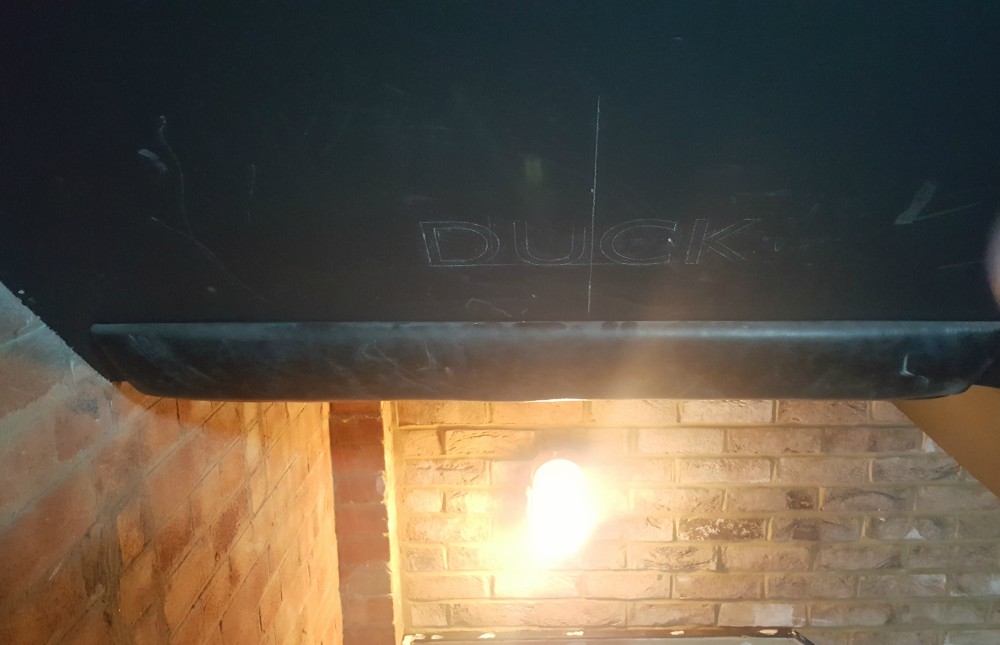 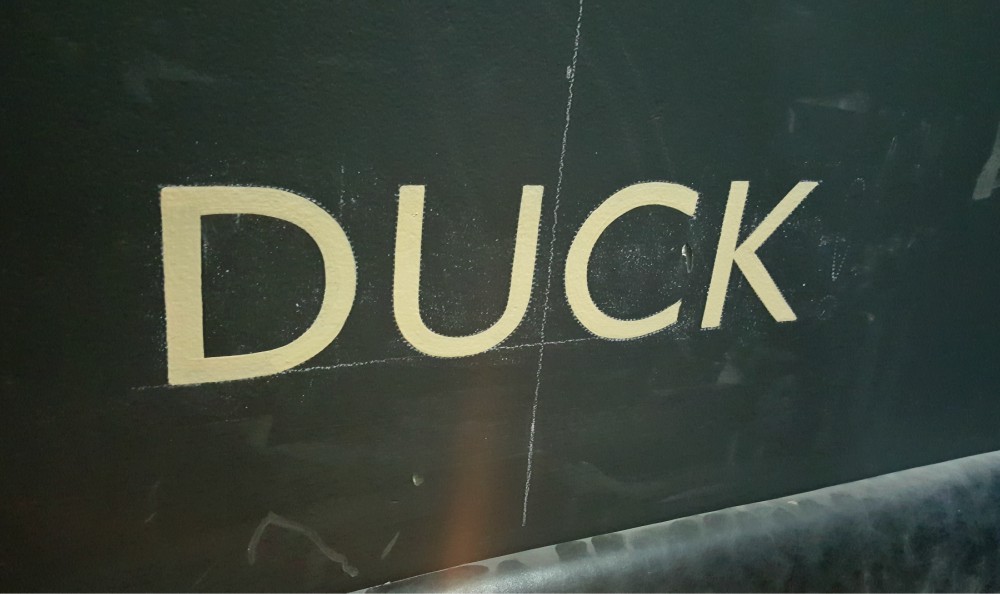 This got completed before other contractors returned from lunch. the final piece to be produced was another door with ‘W.C’ on it. There was enough access to be able to get that drawn on & then painted without issue as well, which completed the work at both restaurants. 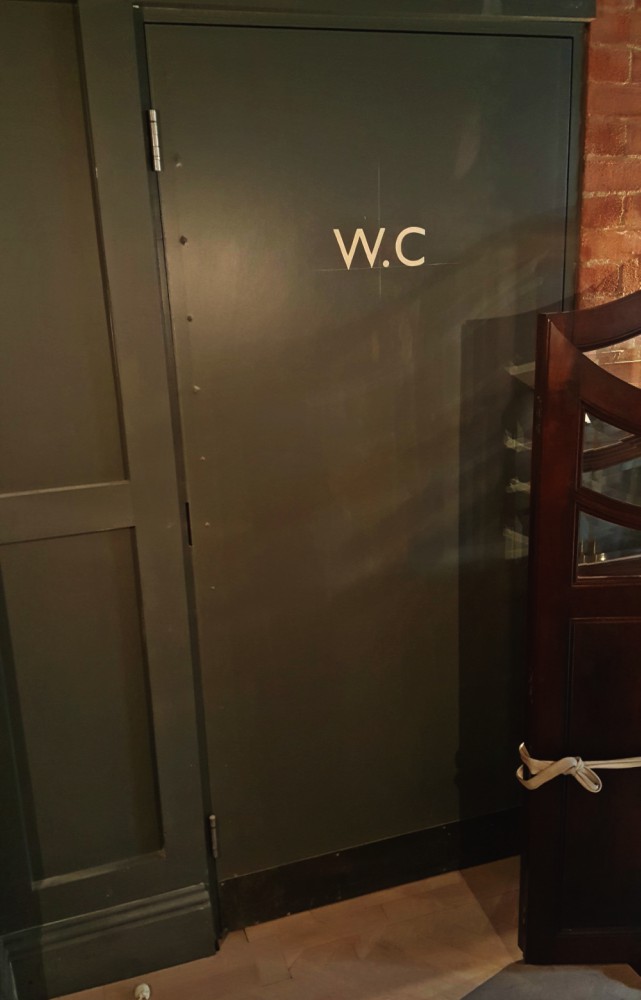