Painted Signwriting by a signwriter is far more professional & produced to a high quality rather than relying on someone who ‘is artistic’ or ‘can do that for a few quid’ . When trying to make a good impression with presentation on your independant shop, its important the signwriting looks neat, presentable & professional to reflect a business ethos you wish to portray.

The clients who called upon the services of Traditional Signs of London were a good example of this. They had a vision for thir business being smart, trendy & professional, so requested a shop front to reflect this. They are very social media savvy so were well aware that impressions & presentation matters. They had taken on a new premises & had a nice sleek logo/branding already designed. They wanted painted signwriting instead of vinyl on their vintage shop front on historic Roman Road in East London.

Their logo incorporated a marble background with black & grey lettering, which was a nice branding looking high end. The request was to incorporate this within the shop front painted signwriting. The logo design is more square than rectangular, which meant a different layout to make it suit a shop front fascia. This is often the case as most shop front fascias are long & thin in a horizontal position, so any logo/branding set out in a portrait layout or square design, is going to have to be altered to suit.

The main wording was re positioned into one line of text but the ‘LP’ in grey was able to stay in the same position. Due to the shop & fascia being painted in the same shade of grey that the ‘LP’ is written in on the logo, it meant that making it show it had to go either a paler colour of grey or a darker shade. The clients chose the darker shade, with the main wording to be in gold leaf. 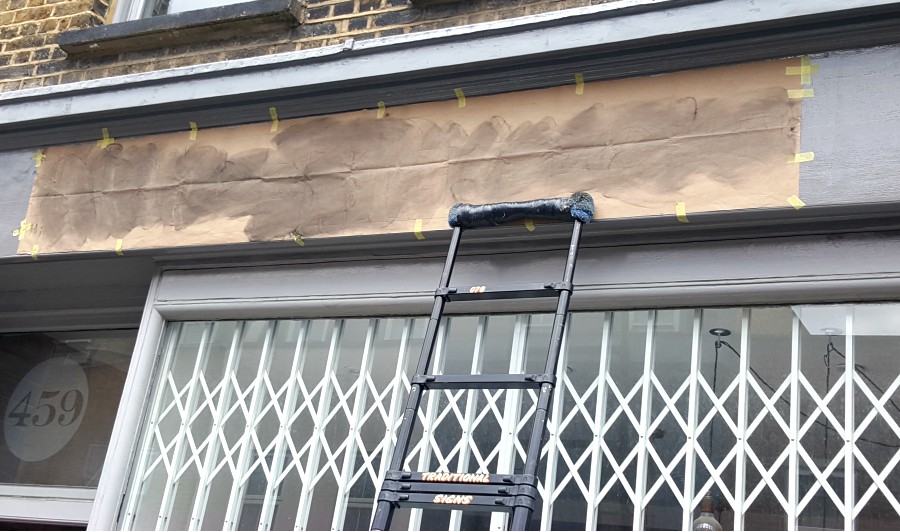 To produce painted signwriting professionally it requires precise measuring. Firstly in sizing the lettering to be painted. this is done on paper in the studio before using it on site. The centre lines are drawn on the paper & once on site drawn on the fascia. These lines are lined up so there is no mistakes & known that the wording is in the middle of the fascia panel. The layout drawing is then pounced or traced onto the shop fascia in chalk or charcoal.

When producing san serif lettering, its a quick method to tape the top & base line of the text. This makes for less strokes with the brush & also gives a sharp crisp edge to the lettering. 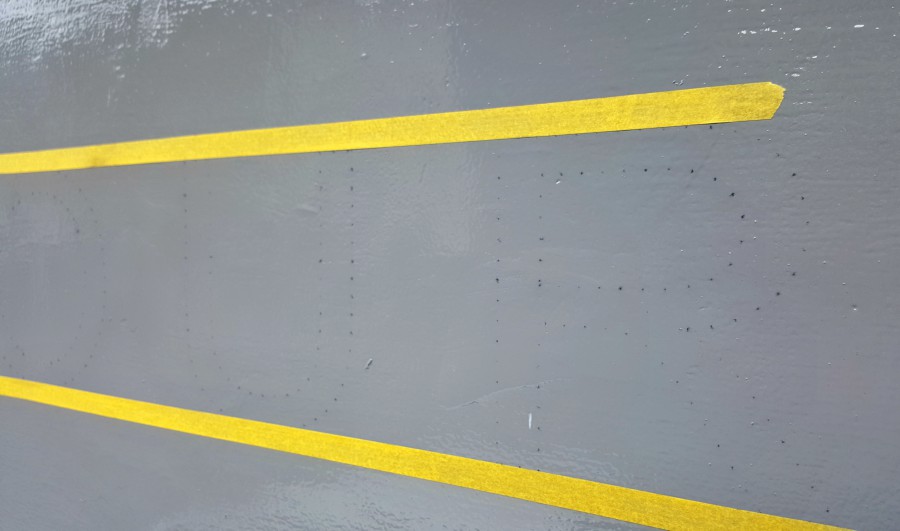 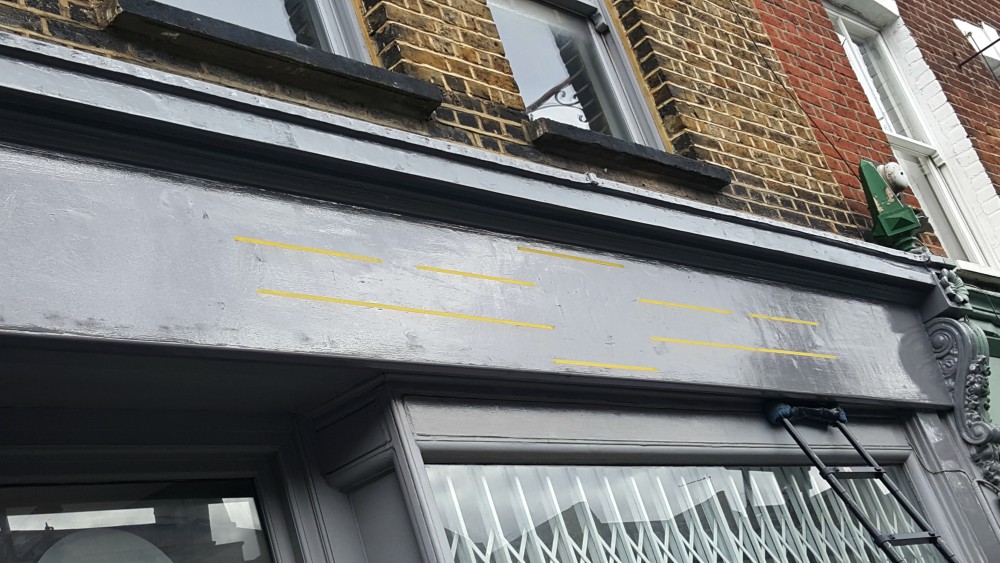 The main wording was the first painted signwriting to be produced. This is dues to it requiring to be painted with an oil size & paint mix so the gold leaf can be pressed to it when its just tacky still.

This is judged depending on the weather conditions & how thick the size mix is painted on. Sometimes a whole word can be painted before the gold is applied & sometimes only a letter or two at a time. This is down to the experience of the signwriter. 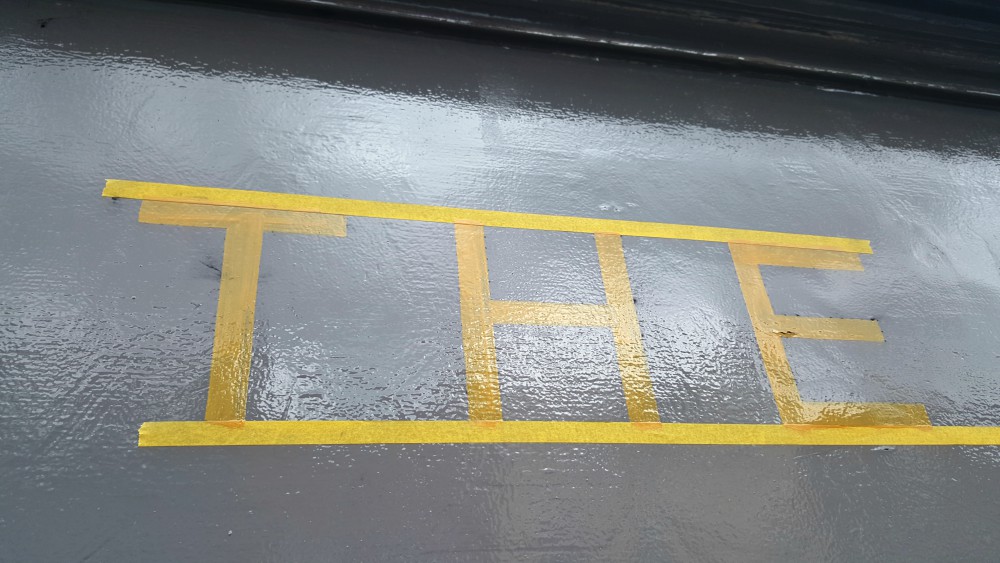 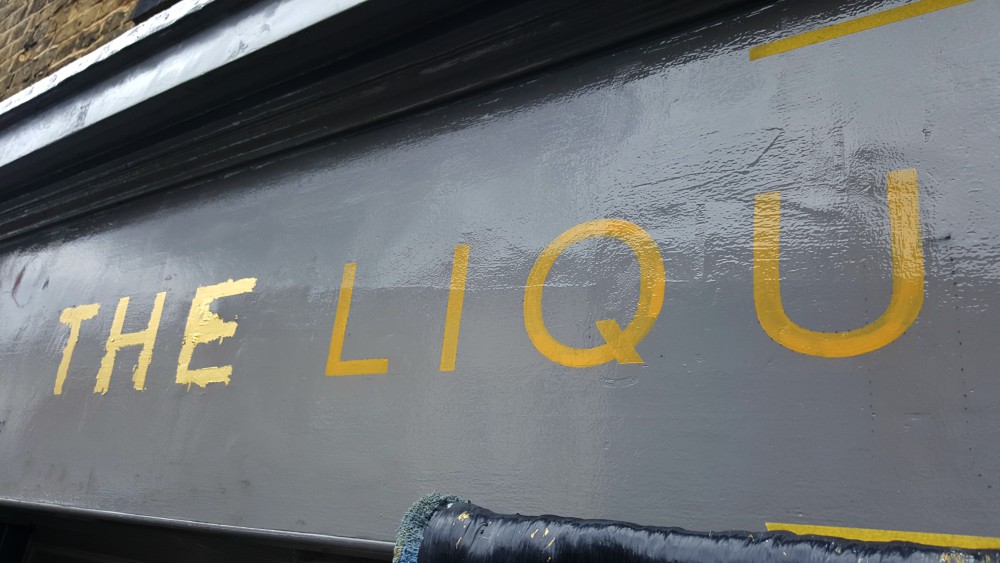 On this occasion the weather was near ideal for gold leaf gilding & so pressing the gold leaf onto the painted signwriting was straight forward & was able to write half of the main wording before applying the leaf. 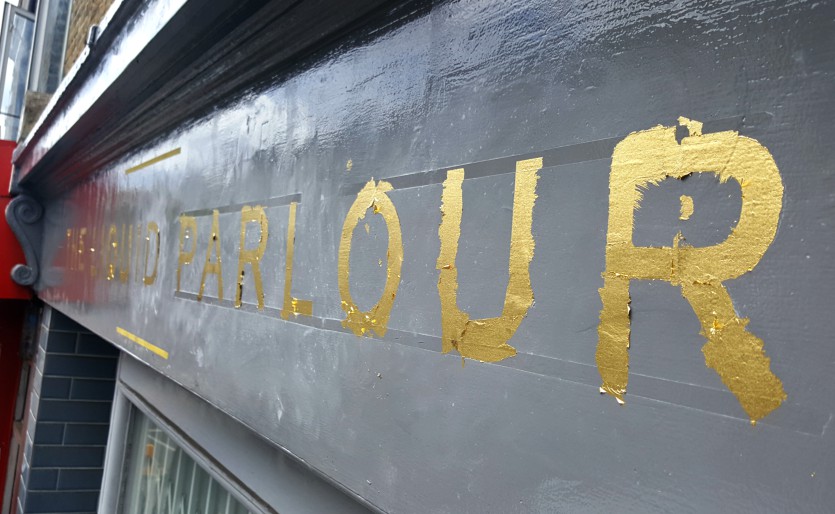 The 2nd half of the main wording is then painted in size & just before dry, again the gold lef is pressed on The whole of the signwriting is then given time to dry & harden with the gold firmly stuck. Then the excess gold is ‘burnished’ off using a specialist soft brush or cloth. This reveals the gold to only remain where the painted signwriting has been written. 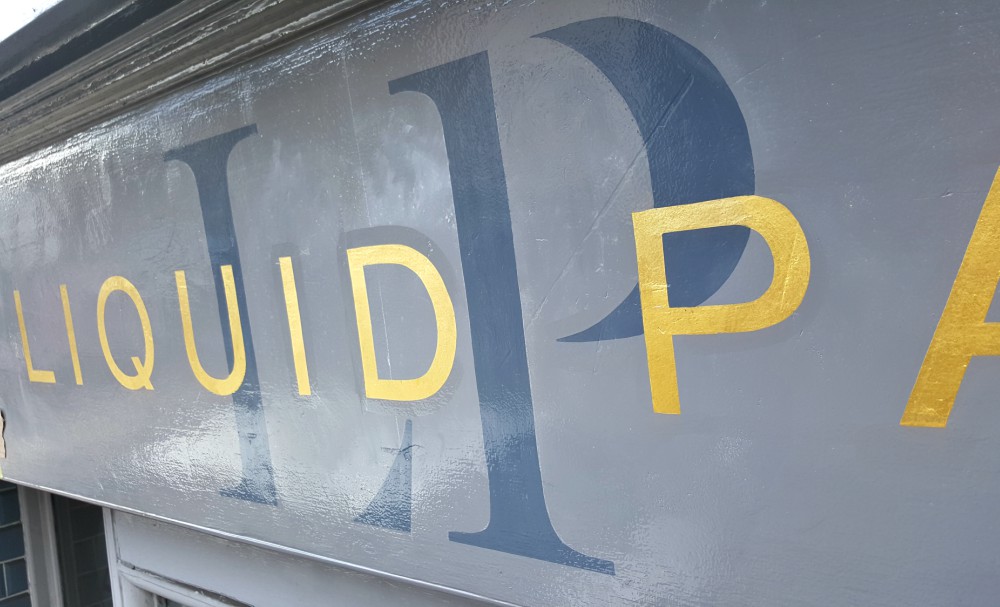 With the gold cleaned up, the ‘shadow’ ‘LP’ was painted in a darker grey colour. This was mixed on site, so the client could agree to the shade before painting all of it. Once decided & agreed, a specialist quill signwriting brush is used to make the lines of the lettering sharp & neat, as well as cover the fill area of the lettering with smooth consistant covering & opaque finish to the letters. 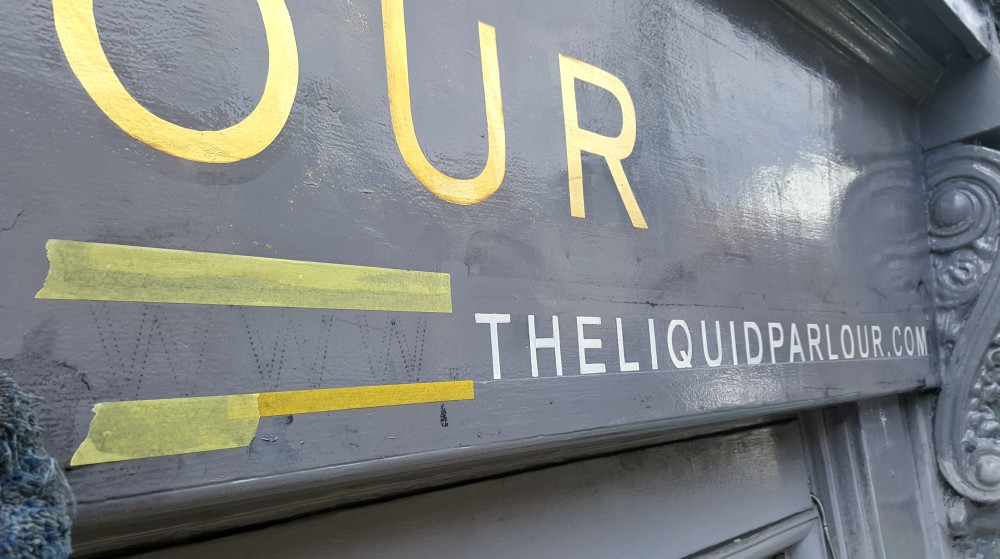 With the main logo & branding completed the next stage was the contact details text. Unfortunately the website address was a fair bit longer than the phone number. Its always neater if the fascia has a balanced look, with matching sized lettering. It was suggested just writing ‘theLiquidParlour.com’ as its pretty much univerally known that www. comes before it without a need to write it. This would reduce the width of text. So the latter part of the web address was painted first to see if the client prefered this or still wanted the www. as well. They decided they would prefer the whole address, so this was painted in. Due to it being white paint, 2 coats were painted to make the white signwriting fully opaque & stand out a little more. 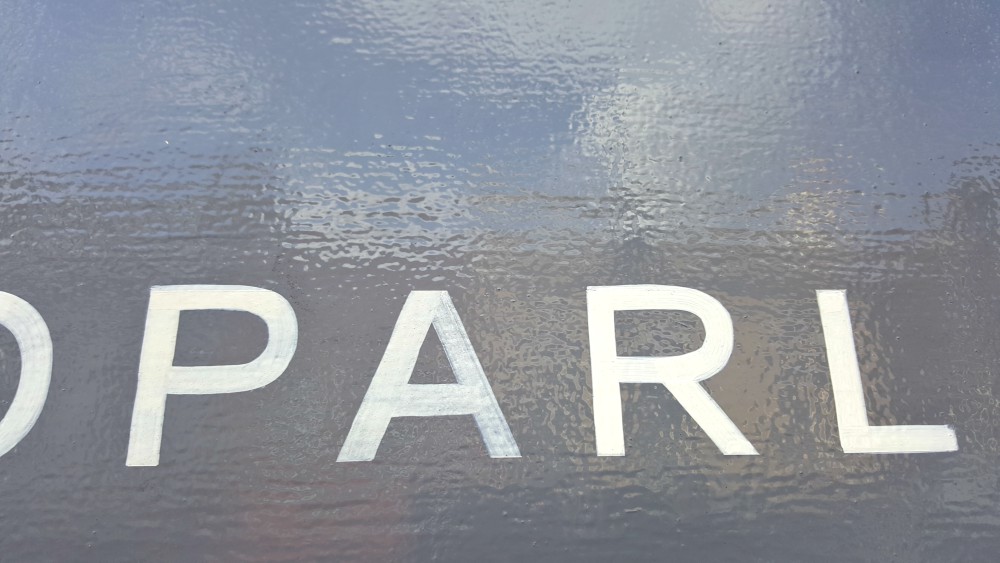 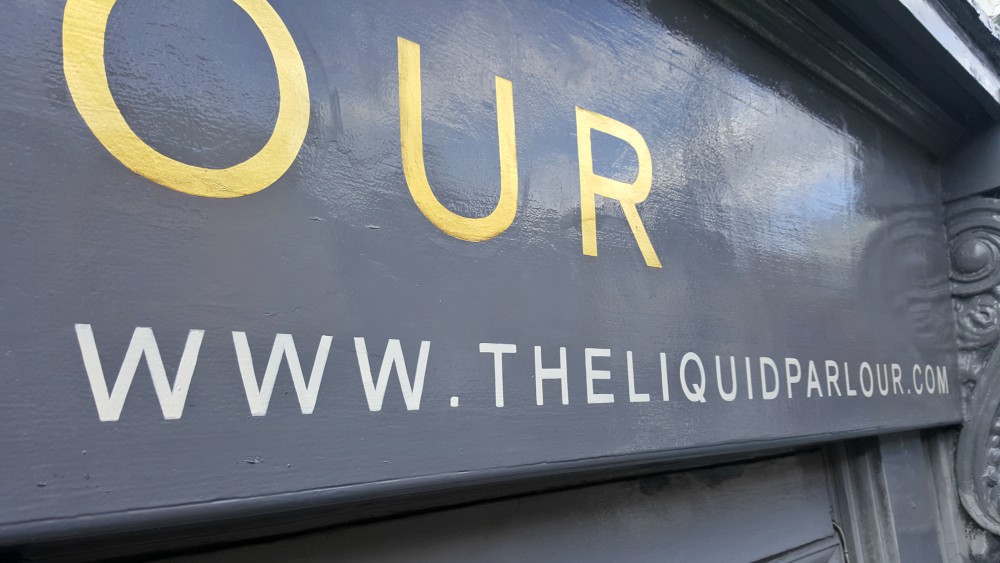 On the opposite side of the fascia the phone number was marked out & tried to be spaced out as much as possible to balance the fascia look. Again due to it being in white paint, a second coat was added once the first coat was dry. 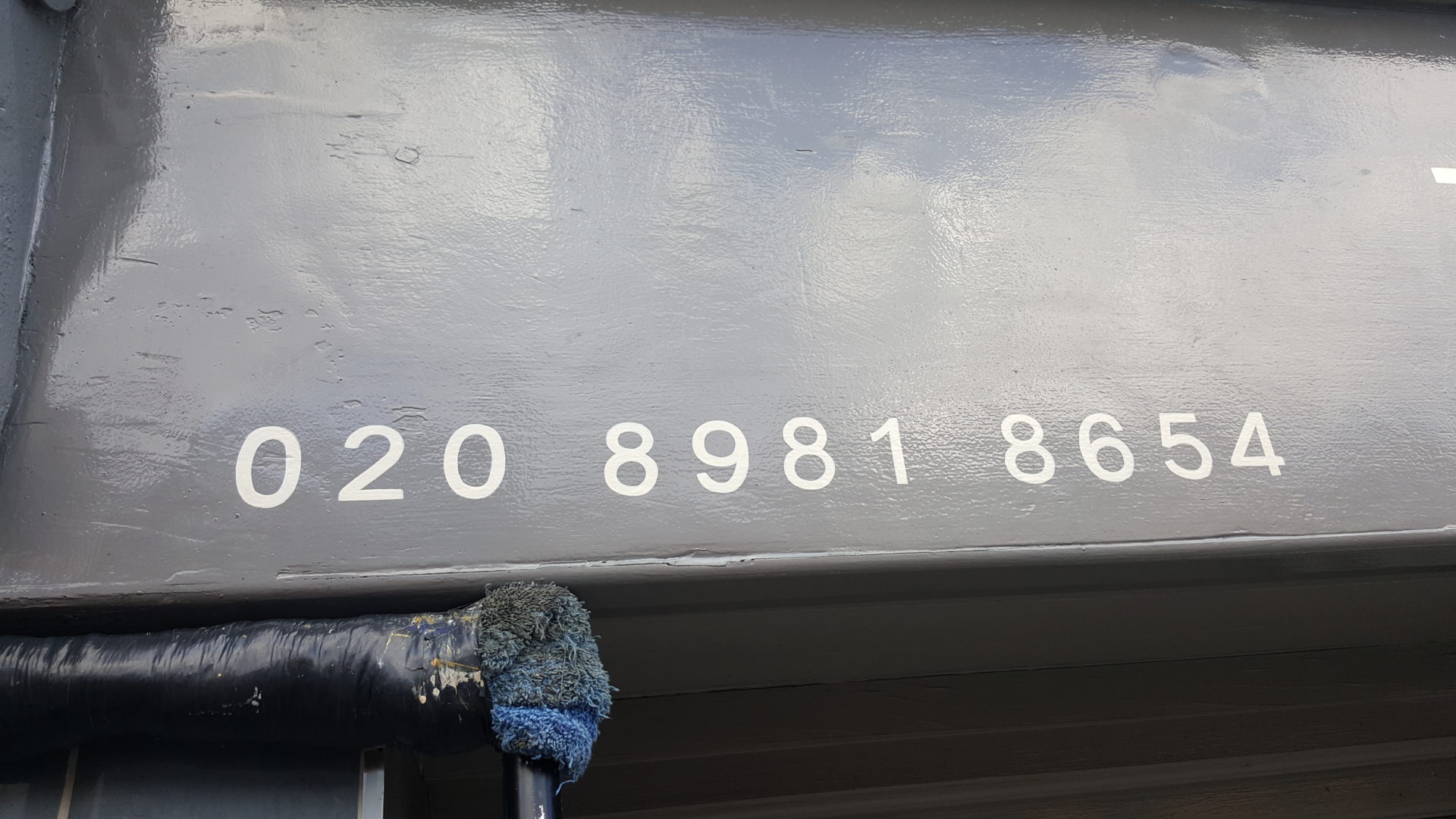 This completed the painted signwriting & the whole project for the clients. They had originally requested gold leaf on their windows, but it was explained to them that it would be beyond their budget, so they had vinyl applied instead, which they apopreciated my honesty with.

They were very please with the results & also could see that once they were open their whole salon was produced to a high standard & must be a delight for their customers to visit. 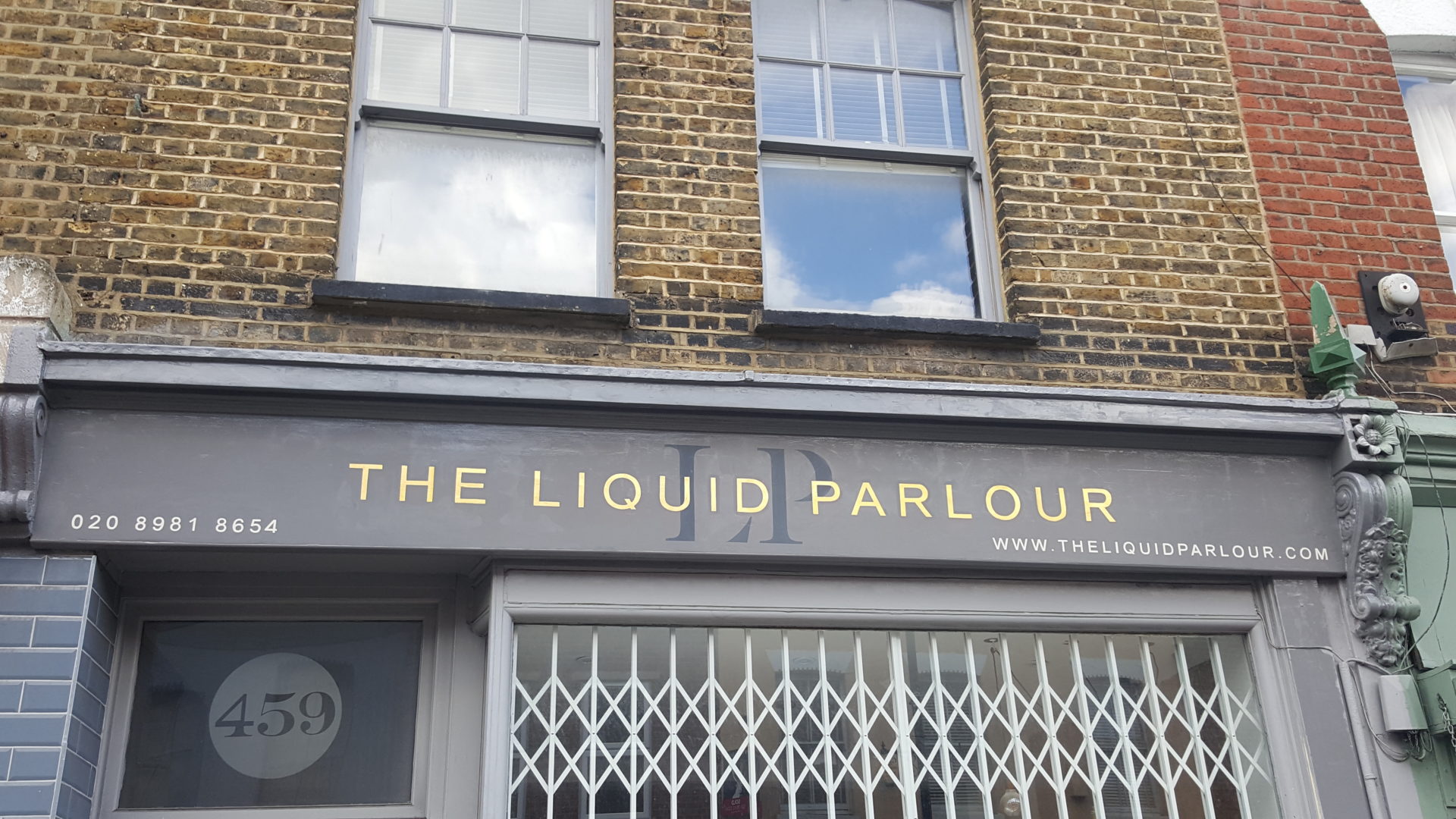 hopefully the widths of the phone number & the web address arent too unbalanced & overly noticable. The neighbouring shop is also hand painted & has gold leaf too so they make for a very nice & presentable pair of shops within such a historic London road.